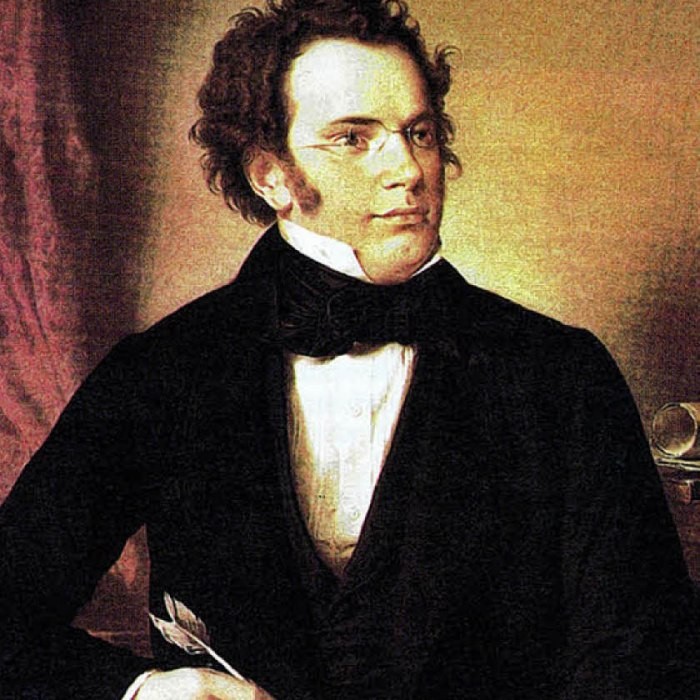 Franz Peter Schubert (31 January 1797 – 19 November 1828) was an Austrian composer. In a short lifespan of less than 32 years, Schubert was a prolific composer, writing some 600 Lieder, nine symphonies (including the famous "Unfinished Symphony"), liturgical music, operas, some incidental music and a large body of chamber and solo piano music. Appreciation of Schubert's music during his lifetime was limited, but interest in his work increased significantly in the decades following his death. Franz Liszt, Robert Schumann, Johannes Brahms and Felix Mendelssohn, among others, discovered and championed his works in the 19th century. Today, Schubert is seen as one of the leading exponents of the early Romantic era in music and he remains one of the most frequently performed composers. Schubert was born in Himmelpfortgrund (now a part of Alsergrund), Vienna, on 31 January 1797. His father, Franz Theodor Schubert, the son of a Moravian peasant, was a parish schoolmaster; his mother, Elisabeth (Vietz), was the daughter of a Silesian master locksmith, and had also been a housemaid for a Viennese family prior to her marriage. Of Franz Theodor's fourteen children (one illegitimate child was born in 1783), nine died in infancy; five survived. Their father was a well-known teacher, and his school in Lichtental, a part of Vienna's 9th district, was well attended. He was not a musician of fame or with formal training, but he taught his son some elements of music. The house in which Schubert was born, today Nussdorfer Strasse 54, in the 9th district of Vienna. At the age of five, Schubert began receiving regular instruction from his father and a year later was enrolled at his father's school. His formal musical education also started around the same time. His father continued to teach him the basics of the violin, and his brother Ignaz gave him piano lessons. At the age of seven, Schubert began receiving lessons from Michael Holzer, the local church organist and choirmaster. Holzer's lessons seem to have mainly consisted of conversations and expressions of admiration and the boy gained more from his acquaintance with a friendly joiner's apprentice who used to take him to a neighboring pianoforte warehouse where he had the opportunity to practice on better instruments. He also played the viola in the family string quartet, with brothers Ferdinand and Ignaz on violin and his father on the cello. Schubert wrote many of his early string quartets for this ensemble. Schubert first came to the attention of Antonio Salieri, then Vienna's leading musical authority, in 1804, when his vocal talent was recognized. In October 1808, he became a pupil at the Stadtkonvikt (Imperial seminary) through a choir scholarship. At the Stadtkonvikt, Schubert was introduced to the overtures and symphonies of Mozart. His exposure to these pieces and various lighter compositions, combined with his occasional visits to the opera set the foundation for his greater musical knowledge. One important musical influence came from the songs of Johann Rudolf Zumsteeg, who was an important Lied composer of the time, which, his friend Joseph von Spaun reported, he "wanted to modernize". Schubert's friendship with Spaun began at the Stadtkonvikt and endured through his lifetime. In those early days, the more well-to-do Spaun furnished the impoverished Schubert with manuscript paper.